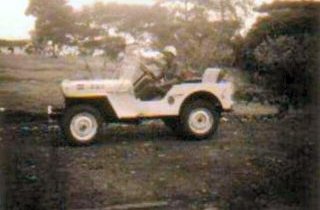 The Military Police Unit of the Tijger Brigade was raised from KNIL personnel who had got their initial training in England. And personnel from the first volunteer units arriving in Malacca after initial training in England. In Malacca they were stationed at Charley Beach. And here they continued their training with assistance of instructors borrowed from the British. The first commander was 1st Lieutenant Poel.
Since the MP unit had no vehicles themselves they went on patrol with members from the British military police. This way they learn the job in practice and how to behave on the job.
On 8th March 1946 they were among the first units of the Tijger Brigade to be shipped out for Semarang arriving on 12th March 1946. On arrival they started working on the different police jobs right away.
On 14th August 1946 the Corps Military Police was created following the lines of the British organisation and headquarter in Batavia. Because of this change of organisation the Military Police in Semarang changed name on 6th October 1946 to 6th Military Police Company with Captain J. F. E. Westerweel as commander.