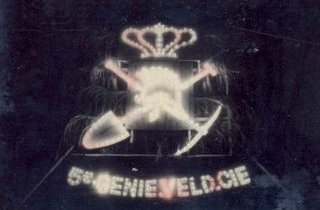 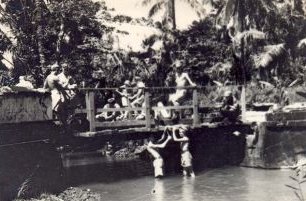 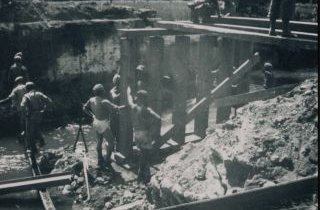 The 5th Field Engineer Company was raised as 3rd Schoolcompagny on 21st October 1946 in Bergen op Zoom. After their basic training they left for Aldershot in England on 1st November 1946. After further training they left for Dutch East India onboard the “Kota Intern” on 22nd November 1946. Here they arrived in Batavia on 20th December 1946.
After their arrival they were first placed as part of the Army Engineer Park. Although their first main task was to guard Japanese prisoners of wars. Until it was decided to transfer the unit to Semarang on 27th January 1947 arriving the day after. Here they found plenty of work since they were the first Engineer Unit to arrive in Semarang. With the only other engineers making part of the infantry battalions.
When the 1st Police Action started on 21st July 1947 3rd Platoon was put to work on repairing the roads along the line of advance while 1st Platoon was receiving equipment in the harbour and 2nd Platoon was left in the camp as reserve. During the rest of the operation they were kept busy in all areas of the Brigade. After the 1st Police Action they were stationed in Salatiga with detachments in Moga, Pekalongan and Weleri were they participated in minor actions.
The start of the 2nd Police Action did not bring much work to the company. Since there where only placed few roadblocks on the line of advance. And therefore Jogja could be reached on 21st December 1948.
After the end of the 2nd Police Action the company’s main task was to repair bridges and roads after sabotage. This they continued to do until they returned to Semarang on 29th June 1949 in connexion with the turning over of Jogja to the Indonesians. From Semarang they were transferred back to Batavia onboard “M.S. Tjitjelenka”. Here they embarked on “Kota Intern” for the Netherlands on 3rd September 1949 and arriving in the Netherlands on 1st November 1949.