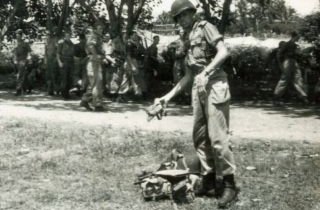 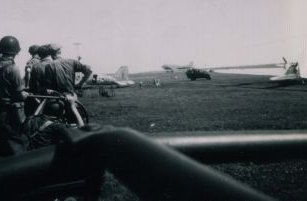 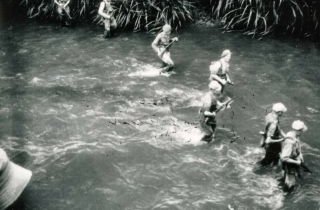 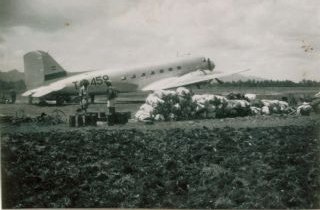 The 5th Regiment Stoottroeopen consisted of conscripts from the year 1947. It was raised on 1st October 1947 in Vught. It left for Dutch East India onboard “Volendam” on 5th November 1947 and arrived 9th December 1947 in Batavia. Right after its arrival in country the specialist was taken away from the Staff and Support companies and sent to East Java to strengthen the Inf XXIII KNIL. The rest of the battalion was moved to Makassar on South Celebes were it continued its basic training. In January 1948 120 men was detached from the battalion and attached to the Military Police 1-MPII. Instead the 2nd company from 5e Garde Regiment Princess Irene was transferred to the battalion.
On 25th February 1948 the battalion went into a fire fight for the first time around Boeloe-Boeloe and Garasikang. And on 3rd May 1948 the battalion transferred to Java were it was attached to the Tijger Brigade relieving the 2-7th Regiment Infanterie in the surroundings of Ambarawa.
During the 2nd Police Action the battalion took part in the seizing of Jogjacarta and the capture of the republican leaders. Being transported by air from Kalibentang at Semarang to the airfield Magoewo at Jogjacarta the first Dutch battalion unit to be transported this way. After seizing the town the battalion was used to secure it.
After the 2nd Police Action the time was used on patrolling and securing in the area around Jogjakarta. On 1st March 1949 the TNI attacked Jogjakarta. An attack which was not repulsed before after six hours of heavy battle. On 10th March 1949 the battalion participated in an action around Wonosari together with the Korps Speciale Tropen, 5-5th Infantry Regiment and 5-6th Infantry Regiment. After which the battalion took over the positions of the 5-5th Infantry Regiment around Kalioerang, Tjebongan en Prambanan.
On 29th June 1949 Jogjakarta was returned to the republicans after pressure from the United Nations. The 1-15th Infantry Regiment was the last unit to leave Jogjakarta and move to Poerwaredja. At the end of October 1949 the battalion was transferred to Semarang and used for guard duty. The battalion stayed here until its repatriation leaving onboard “Nelly” on 7th April 1950 arriving in the Netherlands on 2nd May 1950.