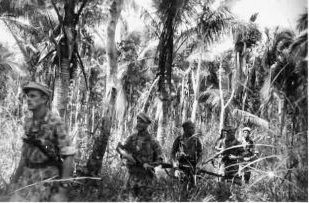 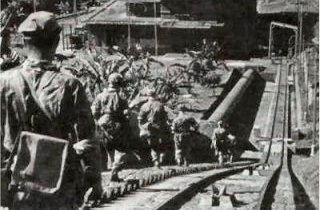 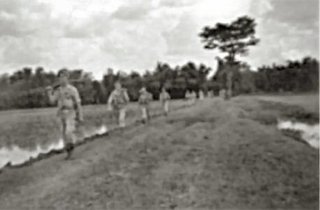 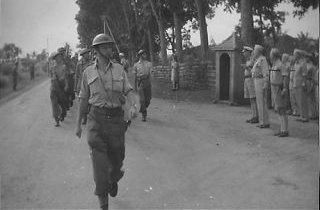 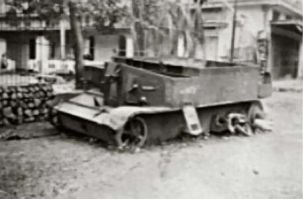 1st Regiment Stoottroepen was raised on 15th July 1945 in Harskamp. It consisted og OVW coming mainly from the former Regiment Limburg of the interior army. This regiment had been active since the end of 1944 and participated in the invasion of Germany as part of 9th US Army. Here the main task had been securing, guarding and police duty. Besides cleaning up resistance pockets. After Germany the regiment was used in Belgium and France. In June 1945 it was amalgamated with Commando Brabrandt and formed as one regiment. The “War Regiment Stoottroepen” consisted of 1st and 3(7) Regiment Stoottroepen.
On 27th September 1945 the regiment transferred to Wokingham in England. To receive further training and equipment to prepare it for service overseas.
12th October 1945 the regiment left for Dutch East India onboard “Alcantara”. But because Admiral Mounbatten Commander South East Asia Command forbid Dutch troops to land on Dutch East Indian soil. They were rerouted to Port Dickson Charley Beach in Malacca.
In March 1946 the Dutch troops finally got permission to land in Dutch East India. And on 12th March 1946 1st Regiment Stoottroepen landed in Semarang. Here it took over the eastern part of the city along the demarcation line including the two post the “Slaughterhouse” and “Boss”. The first search action “Primeur” took place on 1st April 1946 at Kidoel. Here a new post was made “Point 13". The TNI made a few heavy assaults on the town in August but was repulsed. Especially “Point 13” took a great tool.
During the 1st Police Action the battalion advanced in southern direction seizing Oengaran, Bawen and Salatiga. Then it was put into action east of Semarang were it seized Mranggen and Poerwosari. After this followed some searching actions west of Semarang together with 2-6 Regiment Infanterie. On the last day of the 1st Police Action Demak, Dempek and Goeboeg was secured. After 5th August 1947 the 1st Regiment Stoottroepen was placed west of Salatiga with post in Tjandiredjo, Deelok, Karangdoeren and Kopeng. Through intensive patrolling and searching operations it was possible to make the area peaceful by November 1947.
In connexion with the repatriation of 1st Regiment Stoottroepen 2-6 and 2-7 Regiment Infanterie took their area. And by 11th January 1948 1st Regiment Stoottroepen was stationed in Salatiga were it was relieved by 5-5th Infantry Regiment.
On 22nd January 1948 1st Regiment Stoottroepen left Dutch East India onboard “Zuiderkruis” arriving in Rotterdam on 18th February 1948.