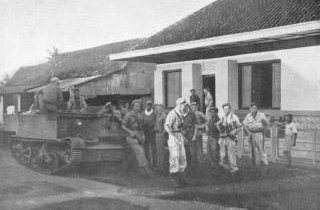 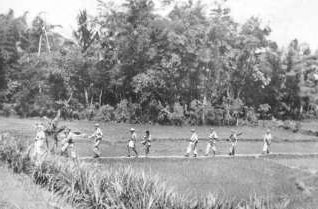 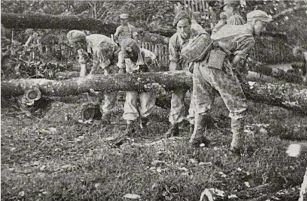 1-15th Infantry Regiment was created shortly before the repatriation on 1st June 1948 in Oengaran. It was made up of conscripts from the last units to arrive so they could fulfil their service in country. Therefore it got the nickname “Blijvertjes" (the stay be hinders). They were supposed to stay for a few months but because of the 2nd Police Action this ended up as nearly a year.
From 12th July 1948 the battalion were put into action around Oengaran. And on 8th September 1948 it was attached to the Tijger Brigade. Here it operated together with the 5-5th Infantry Regiment along the demarcation line with post in among others Bodja, Toentang(brug) en Djelok.
During the 2nd Police Action the battalion was attached to battle group “M”. After the paratroopers from Korps Speciale Troepen had seized the airfield at Magoewo. The battalion was transported by air to seize Jogjakarta from the north. In the days after they cleared up the area and on 22nd December 1948 they took over the securing of Kalioerang from the para compagny.
From here they patrolled the road to Jogjakarta to secure it. On 27th December 1948 part of the battalion was moved to secure the bridge at Sentolo. On 3rd January 1949 an action took place north of Jogjakarta. Here four men went missing of which two later was found to have been killed by the TNI. A situation which made patrolling in the area taking a great tool on the soldiers in the battalion.
On 18th January 1949 operation "Zuid" (south) took place. The goal of this operation was to clear the area south of Jogjakarta. On 1st March 1949 the TNI made a heavy assult on Jogjakarta. This was repulsed after some heavy battles had taken place. After which the actions around Jogjakarta continued as usual. In this period the battalion was stationed in the south western part Jogjakarta taking up positions in Sentolo, Bantoel, Gamping, Padokan en Pedes.
At the end of May 1949 the battalion was relieved by 426th Ingfantry Battalion Infanterie and returned to Semarang to wait for their repatriation. On 2nd July 1949 they left onboard “Zuiderkruis” and returned back in the Netherlands on 26th July 1949.