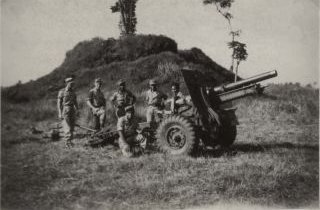 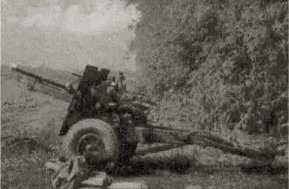 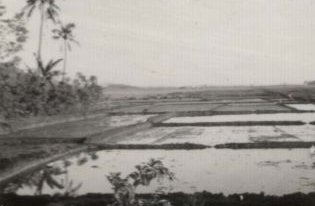 The 5th Unit Field Artillery KNIL was raised in Wezep on 1st September 1946 consisting of conscripts from the year 1945. It left for Dutch East India onboard Tegelberg on 3rd October 1946 arriving in Batavia on 29th October 1946.
In Batavia it was stationed in the Mr. Cornelis Casern until it was attached to the V-Brigade on 8th June 1947. Participating in the advance on Cheribon and Poerwokerto with this Brigade. After the 1st Police Action it was stationed in Gombong participating in the search operations of the different units in the Brigade.
On the opening of the 2nd Police Action on 19th December 1948 the 5th Unit Field Artillery KNIL made a part of a column advancing Preboem. On the second day when the advance continued towards Poerworedjo 5th Unit Field Artillery KNIL was transferred to the Tijger Brigade. And on 23rd December 1948 it reached Magelang.
The time after the 2nd Police Action become very busy for 5th Unit Field Artillery KNIL. To take some of the pressure of the infantry. It had to guard trains, convoys and patrol the railroad in railjeeps. It participated in the evacuation of Djokjakarta taking up a guarding position to help secure the route. After the “Cease Fire” on 10th August 1949 the peaceful time returned. On 7th September 1949 the 5th Unit Field Artillerie KNIL was relieved and returned to Semarang. On 14th October 1949 it was moved to Batavia leaving onboard Johan van Oldebarneveldt 12th November 1949 and arriving in Amsterdam on 6th December 1949.