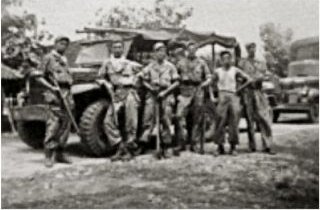 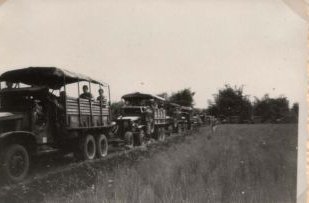 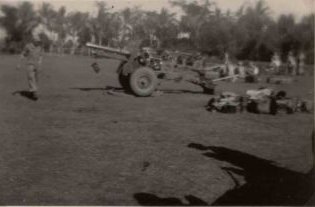 2-12th Artillery Regiment was raised on 1st March 1947 in Ede. It was made up of conscripts from the year 1946. It left for Dutch East India onboard “Zuiderkruis” on 11th June 1947 and arrived on 10th July 1947 in Semarang. Here it was stationed in Oud Tjiandi.
It was planned that 2-12th Artillery Regiment should take over the task and equipment from 1st Unit Artillery KNIL. But because of the tense situation this was postponed.
During the 1st Police Action the personnel was distributed between 1st Unit Artillery KNIL, 2-2nd Artillery Regiment and the Staff Company Tijger Brigade to get some practical experience.
After the 1st Police Action it finally become possible to make a “3 gun” battery with a lot of difficulty and hard work. Beside this the unit got an infantry task for Basis Command Semarang.
On 25th November 1947 the unit finally relieved 1st Unit Artillery KNIL and came under command of the Tijger Brigade again. D. Battery was stationed in Ambarawa on 26th November and C Battery was stationed in Soemonowo on 16th December 1947 both in support of 2-7th Infantry Regiment. Beside the artillery task they also did guard duty and run patrols. And on 9th January 1948 the area started to be peaceful.
The 2nd Police Action 1948 started for 2-12th Artillery Regiment together with 2-2nd Artillery Regiment with whom they fired a barrage of 1000 grenades on 19th December 1948. C. Battery was attached to the armed advance unit and reached Bojohali on 20th December 1948 and Joggjakarta the day after.
On 23rd December 1948 they took over the responsibility in the northern part of Jogjakarta from 1-15th Infantry Regiment. But a few hours later they were transferred to the W-Brigade with whom they operated during the rest of their stay in Dutch East India.
The 2-12th Artillery Regiment left the Dutch East Indies onboard “Fair Sea” on 9th March 1950 and arrived in Rotterdam on 5th April 1950.