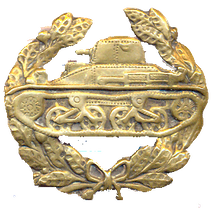 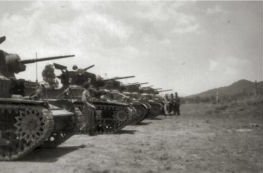 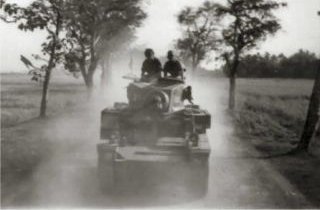 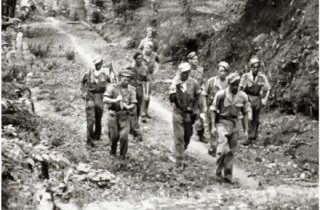 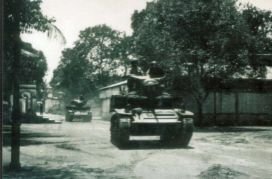 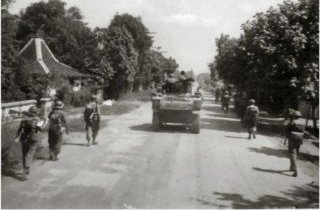 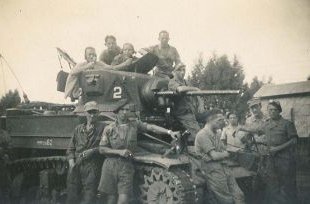 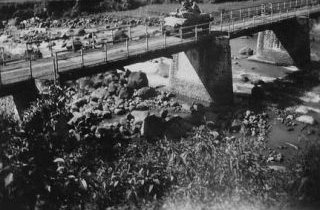 The 7th Tank Squadron was raised on 17th November 1947 in Apeldoorn. Because of lack of transportation it was not until 31st March 1948 it left for Dutch East India onboard Kota Baroe arriving in Tandjong Priok on 5th July 1948. It took a little longer than normal because Kota Baroe got machine problems 3 times during the trip. From Tandjong Priok the tank commanders and drivers moved to the Depot Armed Troops in Bandoeng to get used to the Stuart tank. The rest of the 7th Tank Squadron continued to Semarang three days later.
After arriving on Mid Java the 7th Tank Squadron started to patrol on foot around Salatiga. And took over the protection of the power station in Djelok. Plus shooting exercises in the mountains at Banjoe Biroe. During the 2nd Police Action the 7th Tank Squadron secured bridges and working engineers during the advance on Djokjakarta. After this it took up the patrol duties again besides participating in some greater operations around Bloembang, Djokja, and Sentolo. In the start of January the 7th Tank Squadron took part in the surprise attack on Wates with the goal to make contact with the W Brigade.
And in cooperation with 1-15th Infantry Regiment the convoy route between Djokja to Magelang was kept open and the huge around it taken under control. Patrols were made both on foot and with tanks and armed vehicles.
When the opponent tried to attack and seize Djokjakarta on 1st March 1949 by blocking all roads and isolate smaller outposts. It was the 3rd platoon from the 7th Tank Squadron, which ruined the attack and sounded the alarm. Together with KNIL Infanterie V and 2nd Armed Car Squadron the 7th Tank Squadron repulsed the attack. Rushing down a narrow street in a two tank patrol Reserve 2nd Lieutenant G. van Osch fall into an ambush when a German riegelmine was pushed out in front of the tank blowing the right track of his tank. Firing with everything they had the two tanks pulled back out of the kill zone (Reserve 2nd Lieutenant G. van Osch tank using the left track) and repulsing the opponents until the 2nd platoon come to their rescue answering the call for help on the radio.
When it became known that Djokjakarta was to be evacuated and given back to the opponent. The opponent still continued to be active in the area and delay the redrawal. But the evacuation continued and on 30th June 1949 the 3rd tank platoon from the 7th Tank Squadron left Djokjakarta together with 3rd platoon from 2nd Squadron Armd Cars as the last Dutch units.
After Djokjakarta the 7th Tank Squadron was stationed in Magelang for reorganisation and rest. Besides the normal work with different units from the Tijger Brigade the infantry platoon was used to guard the Brigade Staff in Salatiga. On 17th December 1949 the area around Magelang was given back to the opponent. Except the position named the coffeepot a deserted coffee farm between Magelang and Ambarawa were Reserve 2nd Lieutenant G. van Osch stayed behind with 2nd and 3rd tank platoon, the reconnaissance platoon and a big supply detachment. But although they were in the middle of an area hold by the opponent. Many kampong leaders asked G. van Osch to continue to run armed patrols. To secure the area against armed gangs and the great amount of wild pigs that made a lot of damage in the sawahs. Therefore an agreement was made with the opponents in the area. To continue running armed patrols to make the area secure and to support the local authorities.
Before the 7th Tank Squadron left for Batavia it handed over its equipment to the opponent. On 9th May 1950 the 7th Tank Squadron left Tandjong Priok onboard General M. L. Hersey.