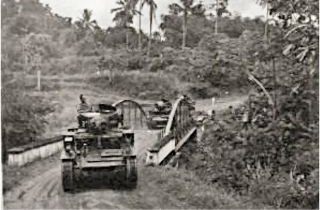 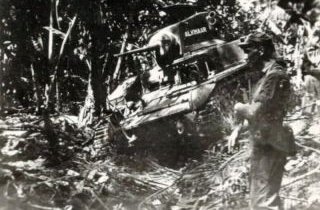 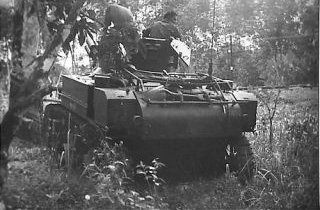 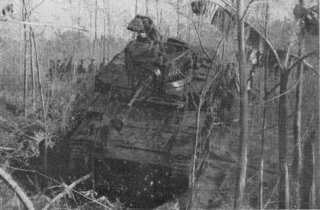 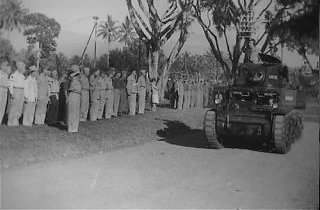 3rd Tank Squadron KNIL was formed in Semarang on 12th April 1946 when 25 men arrived from the KNIL depot in Batavia to take over the Stuart tanks which had been left behind by the A Squadron 11th Cavalry (Prince Albert Victor’s Own). But it was not until the 25th May that same year that the Squadron was up to its full strength. It is unbelievable how much there had been done with those tanks and how they had been stopped with different kind of oils and grease. But even things, which have nothing to do in a motor and could, do big harm to it if they were not found. Their first task being to go on an operation with 2-13 Infantry Regiment which had just arrived. This became a task they often fulfilled. To support the infantry on different operations both as fire support and moral booster. Sometimes it brought funny situations too like when after an operation Lieutenant De Iongh jumped out of his tank to contact the local infantry commander when suddenly he heard a child’s voice saying “Mother there are uncle Daan with the tanks now nothing can happen to us” turning his head to see where it came from he saw the heads of the two sons from a Captain in the Brigade Staff.
When the 1st Police Action started on 21st July 1947 the 3rd Tank Squadron KNIL got the task to lead the way south. There were some worries about whether or not the first obstacle (a river) could be crossed. But it was crossed without problems to great relief for the Brigade Commander. On the second day of the operation another interesting situation appeared. In the road to Ambarawa there was a bridge which needed to be taken before the guerrilla blow it up.
Only it needed to be checked for mines first but while the engineers were making their way underneath it Lieutenant Akkerman’s tank just drove over it and continued the advance. On the 3rd day the Squadron was alarmed with the information that Salatiga had been put on fire. So they continued the advance rushing south at speeds up to 55 km/h. Having reached Salatiga the Squadron stayed there rotating a platoon to Ambarawa for a week at a time. Most of the time went by without anything happening. Except it was decided to seize the little mountain kampong Kopeng since it was often used as starting point for guerrilla activities.
After the 1st Police Action a few changes were made. First the Squadron got its own armed infantry, mortars and pioneers so as to have its own support weapon. Second to defend the dead angels a third machinegun was installed on the turrets.
The personnel were later used to fill in the 5th, 6th, 7th and 8th Tank Squadron KL/KNIL.