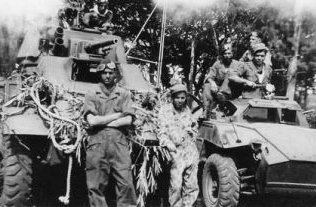 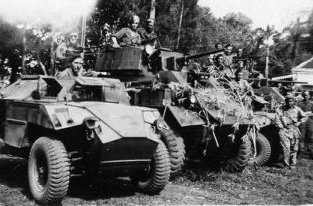 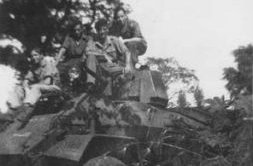 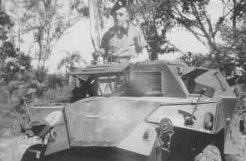 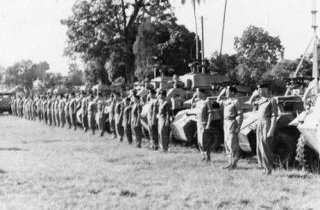 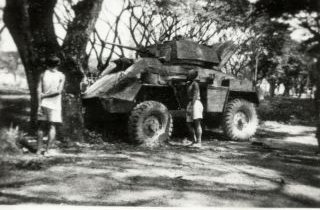 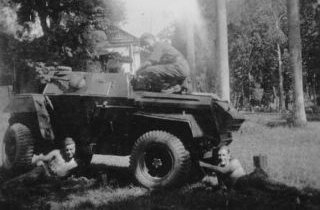 2nd Armed Car Squadron was raised on 10th January 1946 in Amersfoort with personnel consisting of OVW’s. After their basic training they transferred to England on 23rd July 1946 for further training and receiving equipment. On 24th August 1946 they left of Dutch East India arriving in Tandjong Priok on 18th September. Two days later it was decided they should continue to Semarang.
In Semarang they where first stationed in the centre of town but soon they moved to a villa in Djatingaleh in the southern part of the city. Here they continued their training and started to participate in security operations and attacks as support for different infantry battalions.
In preparation for the 1st Police Action an armed colonne was organised consisting of 2nd Armed Car Squadron and a company of 1st Regiment Stoottroepen (RS). But it was not until the second day of the 1st Police Action this unit was put into action. When it on the 22nd July 1947 was ordered to seize Oengaran and after a break here it was ordered to continue to Bawen 15 kilometres further south. Reaching Bawen a new situation arise. There was a big danger that the bridge Toentang will be blown while they were watching. Instead of waiting for permission from the Brigade Commander to continue forward. The commander of the spearhead lieutenant F. van Ogtrop got permission from the commander of the colonne to move forward and take up a better position. Without hesitation and under mortar fire from the enemy he moved forward with the storm company from 1st Regiment Stoottroepen in support. It was at the last minute since the bridge had been prepared for demolition and it had only been a question about pulling the trigger. For this action lieutenant F. van Ogtrop and corporal Kluk who lead the way in a scout car got the Bronze Cross.
On 24th July the eskadron was ordered back to Semarang. Here it participated in different operations in support of different units. The last huge task during the 1st Police Action was when it was ordered to participate in the attack in western direction on the coast road to make contact with W-Brigade which happened on 4th August just before the end of 1st Police Action. After this the squadron was transferred to Salatiga where it was split between different units.
The period which followed the 1st Police Action was very peacefully for the squadron. Although they of course continued to run patrols. A lot of time was spend on sport and competing with other units. Because of this people start to ask themselves for how long they will have to stay on in Dutch East India. And then the news about the 2nd Police Action came up.
This started on 21st December 1948 when the eskadron moved forward together with the 2nd company from 5-5 Infantry Regiment in the direction of Djokja. And reached the airfield at Nagoewo were they made contact with the paratroopers who had been dropped here earlier in the day. This was the only bigger operation in which the squadron took part during the 2nd Police Action. The rest of the time was spend on patrols and convoy duties. A duty which took a big tool on the men since the scout cars was not well fit for this task.
On 29th June 1949 the squadron left Djokja together with the rest of the Dutch forces. On 13th July all equipment was turned in and on 26th July 1949 they returned to Semarang. Here they went onboard the “Trisadana” and sailed for Tandjong Priok. From here they left Dutch East India on 10th August 1949 onboard “Waterman” returning to the Netherlands on 9th September 1949.